By Annika Seeto on 25 November 2016 in Foot pain, Footwear

What is a bunion?

Bunions (Hallux Abducto-valgus) are a common deformity at the base of the big toe. A bunion is often described as a ‘bump’ on the side of the big toe with the same big toe deviating towards the second toe rather than pointing straight. A progressive disorder, the gradual leaning of the big toe changes the alignment and angle of the big toe joint and over years slowly produces the characteristic bump. In addition there is often a thickening of skin and tissues that may become inflamed and painful. Symptoms often appear at the later stages, although some people never get symptoms. 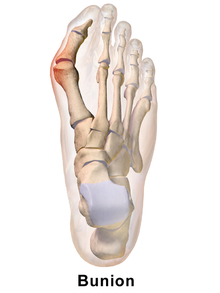 What causes a bunion?

Bunions are a result of complex biomechanical changes that occur in your feet. Often blamed as ‘hereditary’, it is not the bunion itself that is inherited, but rather the foot type and/or causative factor that makes a person prone to developing bunions. For example, over-pronation of your feet can lead to higher forces through your big toe joint, increasing the likely-hood of a bunion.

Ill-fitting shoes such as high heels and pointy end shoes (tight toe box) do not cause bunions. However, they do  encourage the deformity to progressively get worse resulting in early onset of symptoms.

Symptoms and problems of bunions

Bunions are visibly apparent. However, to fully evaluate the condition, your podiatrist may request x-rays to determine the degree of deformity and assess changes that may have occurred.

What is the treatment for bunions?

Many people unnecessarily suffer discomfort for years before seeking treatment.

Unfortunately, bunions do not go away and more often than not, gradually get worse over time if not treated efficiently. This is why it is vital to see a podiatrist for treatment BEFORE symptoms and issues arise. Early treatment is aimed at stopping the progression of the bunion and easing the pain.

If the bunion deformity is too far advanced or if non-surgical treatments fail to relieve bunion pain and the pain interferes with daily activities, your podiatrist may refer you to a surgeon. There are a  variety of surgical procedures available and the type of surgery is dependant on each individual case.

Annika graduated with a Bachelor of Health Science majoring in Podiatry from the Queensland University of Technology (QUT) in 2012. With a special interest in sports podiatry, Annika commonly uses a combination of orthotics, stretching and strengthening exercises, footwear recommendations and medical imaging to diagnose, treat and prevent diseases of the lower limb. Annika worked in a multi-disciplinary practice on the Gold Coast before recently relocating to Sydney and joining The Foot Group at our Lane Cove Clinic.
View all posts by Annika Seeto →

Morton’s neuroma: Why do I feel like there is a stone in my shoe?
Running pre-training tips